Soon after, joint activities of Nature, Social and Business have brought unexpected renown and results.

Nature happily joined business and social actions using natural resources of the forest. He used them in a way so that the nature could heal itself. For example, he would pick forest fruit and give it to Business for sale. He ordered logging, but in a rational manner, so that the forest could quickly come back to its previous state. He disagreed with burning wood in electrical plants even though it resulted in biofuel. He educated other bears that burning wood in furnaces, especially the wet wood straight from the forest, is very harmful. He helped building wooden houses and furniture. He also employed other bears so that they could afford education, health care and fulfill their children’s dreams. He managed whole nature in a way that Social, but also Business and his partners, could treat nature as a friend, take care of it and benefit from it.

Social eagerly developed educational activity and helped more and more bear families. Together with Business, they opened a network of hospitals, care homes, nurseries, a plan kindergartens, schools and universities. In cooperation with Nature, they organized plan of housing areas for bears. It was a beautiful area surrounded by lots of greenery with singing birds and blooming flowers where bees could feed on nectar.

Business put a lot of effort into creating new job positions. He needed lots of well educated and creative bears. He cooperated with other bears who were focused on business. At the same time, he and his business partners tried really hard not to harm the nature. They got on well with workers; they respected and appreciated them greatly. They hoped to see development, cooperation and self-organisation and supported them effectively. Thanks to competition in the market, every bear had a wide variety of pleasures and essentials in life.

Social, Business and Nature decided to help bear community on their Planet to maintain beautiful nature and renewable resources. They wished all bears would stop suffering from hunger and bees could produce honey. They wanted education, entertainment and development, health and happiness for everyone. That was the reason why Bear Representative Convention was organised in 2015. They were deliberating for a very long time: exchanging information about their achievements and provoking a debate about new solutions suitable for all bears. When they felt that the agreement is close and every member accepted the ideas they grabbed their paws and said “From now on, our whole Planet will be a better place.” They marked this agreement with the sign of sustainable development.

The agreement was signed among bear families from different parts of the Planet by their representatives. Such representative was called Govern and there were 193 of them. This agreement included 17 goals to be achieved by all bear families on the Planet. They agreed upon 169 tasks that had to be done to fulfill the plan by 2030. That was the year when their world had to be transformed, their lives were improved and the world changed for better. They designed different signs for every goal. 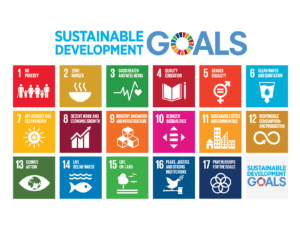