Once upon a time, there were three exceptional bears called Nature, Social and Business but they didn’t know each other.

Nature lived deep in the forest surrounded by beautiful nature. He had many great friends among animals. He also loved plants and he willingly interacted with them. Everyday they sang and told each other about their days. Nature loved everyone but he stole honey from bees because he was a great gourmand.

Social lived in his house at the edge of the forest but he very rarely visited it. He spent all his days on helping his family and friends and he didn’t have time for strolls. It gave him a lot of joy and made him feel fulfilled, though. He really enjoyed educating, sometimes even haranguing, which was pointed out to him. He was trying really hard to make everything around work so that everyone is happy.

Business was a loner but always in hurry. He smiled only to his clients. He lived alone in a big villa with a garden. He had a swimming pool, a fountain, and a big gazebo where he hosted his clients in summer. As a matter of fact, he went to his garden only to meet his clients. He didn’t have time to talk to plants or animals. He rarely swam in his swimming pool. Business, clients, deals, strategies, it was all his life.

One day, they all bumped into each other by accident at The Great Honey Festival. They were standing in a queue to get a pint of fresh and sweet honey. Wasps and bees were constantly attacking so they were waving their paws to scare them away. They poked each other accidentally. That was how they met. They apologised to each other and introduced themselves. Later on, they took their pints of honey and sat together. At the beginning, conversation was heavy going, only honey was flowing into their mouths. When they finished, they heard music playing and all of them were impressed by it.

“No matter sorrows and sadness,” said Nature and started dancing to the rhythm that wouldn’t allow anyone to sit still.

Soon after, Social and Business joined him. They were dancing all evening and when they got tired and were almost ready to say goodbye, Business invited them to his place. Fortunately, he lived quite close. They happily accepted the invite and that was the beginning of a great friendship.

They would meet every week and they had more and more interesting ideas to talk about.

One day, Social offered to take actions for the good of all. Actions to make all their friends from the forest happy, so that Social’s family wouldn’t get hurt and Business and similar bears worked effectively but for the common good. Business hesitated for a moment but, after giving it some thought, he suggested his action plan for the common good and everyone accepted it. They shook paws on that and invented sign of sustainable development for their new, cooperative activity. 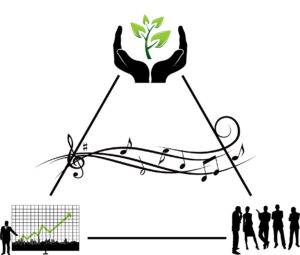